McDonalds Wants to Woo You with Two New Big Macs 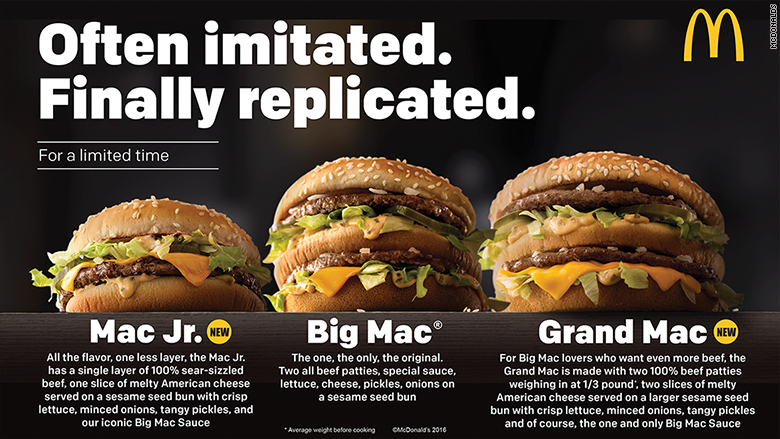 Today’s fast-food consumers trend toward better burgers with fresher beef and a wider variety of toppings. Last year an internal company memo revealed that only 20 percent of millennials had even tried a Big Mac. In an attempt to respond to changing consumer behavior, the company unveiled two new-look Big Macs, the limited-edition Mac Jr. and Grand Mac, to accompany the original. All three versions hold to the traditional frozen patties and classic sauce. The difference is size: The Mac Jr. lacks its middle bun, has only one patty, and has fewer calories (460) than a turkey sandwich from Panera Bread; the Grand Mac, an 860-calorie monstrosity about 1 ½ times as big as the 540-calorie original, will likely serve as more of a novelty item for the extremely hungry.
Unlike other chains, such as Taco Bell, whose Doritos Locos Taco did $1 billion in 2012, its first year, McDonald’s has struggled to draw crowds with its creations. Burgers account for almost 20 percent of the restaurant chain’s sales, but it’s been decades since there was any groundbreaking innovation. In 2013 the company pulled its Angus burger off the menu. Consumers weren’t willing to buy it for $5 when they could get a standard burger off the Dollar Menu instead.
It is likely going to be difficult for McDonald’s to win over younger customers by changing something they haven’t been interested in trying. Millennials prefer seemingly healthier burgers, the kind made at chains such as In-N-Out and Shake Shack. McDonald’s is experimenting with fresh meat; last year it removed artificial preservatives and additives from breakfast items and chicken nuggets, but that’s not enough to ensure it’ll continue to have billions and billions to serve.

Discussion Questions
Do you think that offering the Big Mac in different sizes will appeal to customers who are not currently buying them? Explain your answer.
How would you position the Big Mac to a customer in 2017 that has so many other burger options?