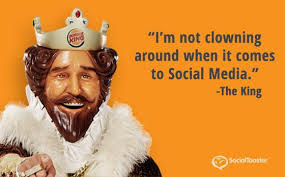 Burger King marketers face a significant challenge. McDonald’s remains the world’s largest restaurant company, and its sheer size has pushed Burger King to take marketing risks to stay competitive. In 2014, McDonald’s had roughly five times Burger King’s ad budget, with money for Super Bowl ads and sponsorships of the FIFA World Cup and the U.S. Olympic team. However, the budget size advantage doesn’t go as far as it used to because of social media. If marketers can utilize social media as part of their marketing plan, it can generate more buzz than paid media.

Burger King likes being edgy and it has proved that it doesn’t mind doing things that might make other brands blush. In 2015, as the company pushed a new spicy version of its chicken fries it tweeted a picture of what appeared to be a stack of adult magazines. The magazines, their cover images blurred, were set next to a box of Fiery Chicken Fries, and the tweet read: “Hotter than your summer reading list. #fierychickenfries.” Less than a week later, a similar tweet featured blurred-out images of bikini-clad women with this message: “Hotter than your browsing history.”

In an age when office chatter has moved from last night’s TV episode to the latest viral video, part of Burger King’s marketing advantage has been its willingness to move quickly to exploit a constantly churning Internet news cycle. After the company reentered France in 2013, following a 16-year absence, social media there were besieged with negative comments from French customers complaining about long lines at the restaurants. Burger King didn’t waver in the face of the apparent customer service crisis. Instead, it printed some of the “angry tweets” on construction panels at the new locations as proof it had heard the negative feedback. That gambit generated millions of retweets, won a marketing award, and again showed Burger King to be a brand that isn’t afraid to ignore conventional wisdom.

In June 2014, Burger King’s chief financial officer, said the company would rely more heavily on data to make sure its marketing was cost-effective and reaching the right customers, and was “shifting channels toward more digital and social media.”

The huge ad budget differential is one reason Burger King is likely to continue rolling out marketing stunts such as its open letter to McDonald’s in August 2015, asking its longtime rival to help it create a hybrid burger from the two chains’ ruling sandwiches; its sale would benefit charity. For the price of two full-page newspaper ads, Burger King and its hypothetical “McWhopper” lit up the Twitterverse and quickly generated chatter around its brand across social media.

Source: Craig Giammona. “In Social Media Marketing, the Burger King Has It His Way” Bloomberg.com, October 1, 2015.

1.Are there any other restaurants that you think do an effective job utilizing social media marketing?

2.Do you think companies will spend less on advertising in the future due to the power and cost effectiveness of social media?