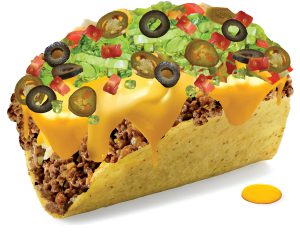 When Taco Bell introduced a food-ordering app in October, the chain figured it could speed up service for customers and cut down on wrong orders. What Taco Bell didn’t know was how this might change consumer behavior and how much extra food Americans order when they do so from the privacy of their smartphones.

That’s why Taco Bell’s Live Más app, available for its 6,000 U.S. restaurants, has been downloaded more than 3 million times. Customers who use it also spend more than $10 on an average order—about 20 percent more than those who order in person.

The app is pretty easy to use for most customers. After storing your credit card information, tap and swipe to select from the menu, then hit “submit.” To ensure the food is hot, the order is filled only when a customer is within 500 feet of a Taco Bell and notifies the store that they will pick up the food inside or at a drive-thru window—the app includes what’s known as a geofence to determine a user’s location.

Taco Bell’s same-store sales rose 6 percent in the quarter that ended in March. The app has also reinforced Taco Bell’s standing with young, tech-savvy customers. Other companies are trying to go in this same marketing direction. Starbucks takes an estimated 8 million of them through customers’ phones each week and ordering ahead is available at only about a third of its U.S. locations. McDonald’s and Burger King have lagged behind on mobile ordering. Burger King’s app provides coupons and locations; McDonald’s has said it will release a global app this year but hasn’t said whether it will take orders.

Competitors may want to replicate one surprising finding from Taco Bell’s market research. In early surveys by the company, customers reported that the food ordered on a smartphone tasted better.

2.If you were a marketer for Taco Bell, what other features would you include in the app to increase profits and improve the customer experience?